Sprayed seals are an important component in the road system in Australia and New Zealand (Figure 1.1). Much of Australia is sparsely populated with large distances between centres of population. Providing a network of sealed roads has necessitated the development of outstanding skills in low-cost road construction and maintenance techniques, particularly the use of thin sprayed bituminous treatments on pavements constructed from locally available materials (often of marginal quality) or crushed rock. Similarly, in New Zealand, a relatively small population base has driven the need for low-cost road building.

Figure 1.1: Sprayed seals are an important element of the Australasian road system 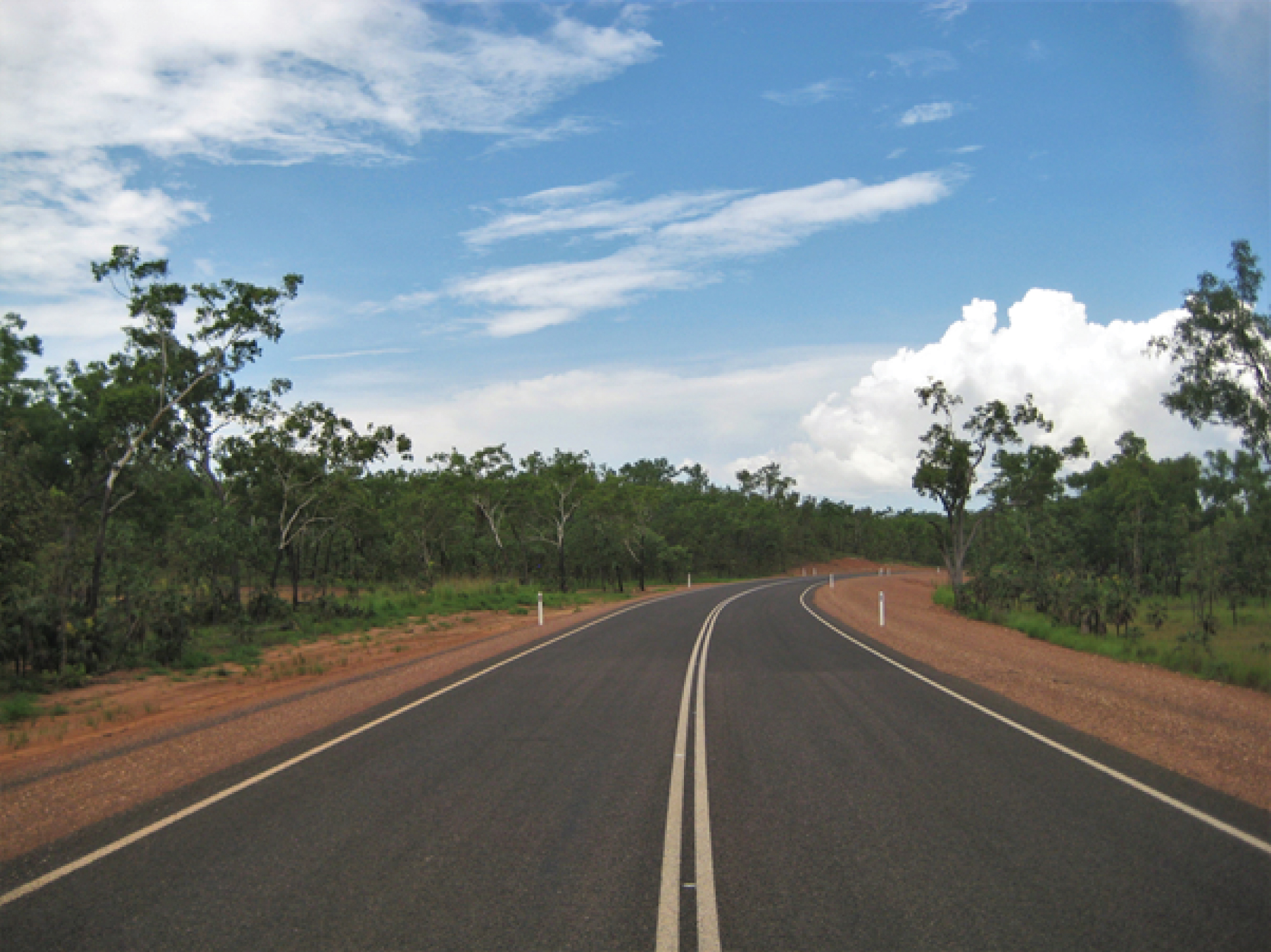 Sprayed seals are an economical surfacing and the techniques developed in Australia and New Zealand allow them to be used effectively as treatments on roads carrying several thousand vehicles per day.

The Australian road system comprises some 810 000 km of roads, of which 330 000 km are surfaced with sprayed seals, asphalt or concrete (Austroads 2005a). The New Zealand road system comprises some 92 000 km, of which 59 000 km are surfaced (Austroads 2005a). In both countries, sprayed seals are the predominant surfacing type in rural areas. Sprayed seals account for around 70% of the total length of all surfaced roads. In urban areas, asphalt and concrete surfaces predominate due to their structural strength, durability, improved resistance to surface stresses and lower maintenance.

Sprayed seals are held in place by a combination of adhesion between binder and aggregate, mechanical interlock between adjoining aggregate particles, adhesion to the underlying base and binder rising up and filling the space between aggregates.

Traffic has a major effect on the performance of sprayed seals. Under heavy traffic, aggregate particles become closely packed and are re-oriented so that they lie substantially on their broadest dimension with the least dimension vertical. Under light traffic (less than about 200 v/l/d), aggregate particles remain in a more random arrangement, with greater space between the aggregate particles, so that the amount of binder required to fill up the space to effectively hold the aggregate in place, without the risk of flushing, may be up to twice that required for the same size aggregate on a heavily trafficked road. Traffic volume and aggregate size are, therefore, primary factors used in the design of sprayed seal binder application rates.

Other factors affecting the design of binder application rates for sprayed seals include adjustments for aggregate shape and special traffic conditions, allowances for texture of the existing surface, possible embedment of aggregate into the substrate, and/or absorption of binder into the pavement or aggregate.

The most common form of sprayed seal is a single application of hot bituminous binder and a single application of aggregate (Figure 1.2 and Figure 1.3). This may be used as a retreatment of an existing bituminous surface, or on a granular pavement that has been primed or initially sealed. Priming and initial seals generally involve the use of cutback bitumen (to reduce viscosity of the binder) to obtain the necessary penetration and/or adhesion to the underlying pavement. 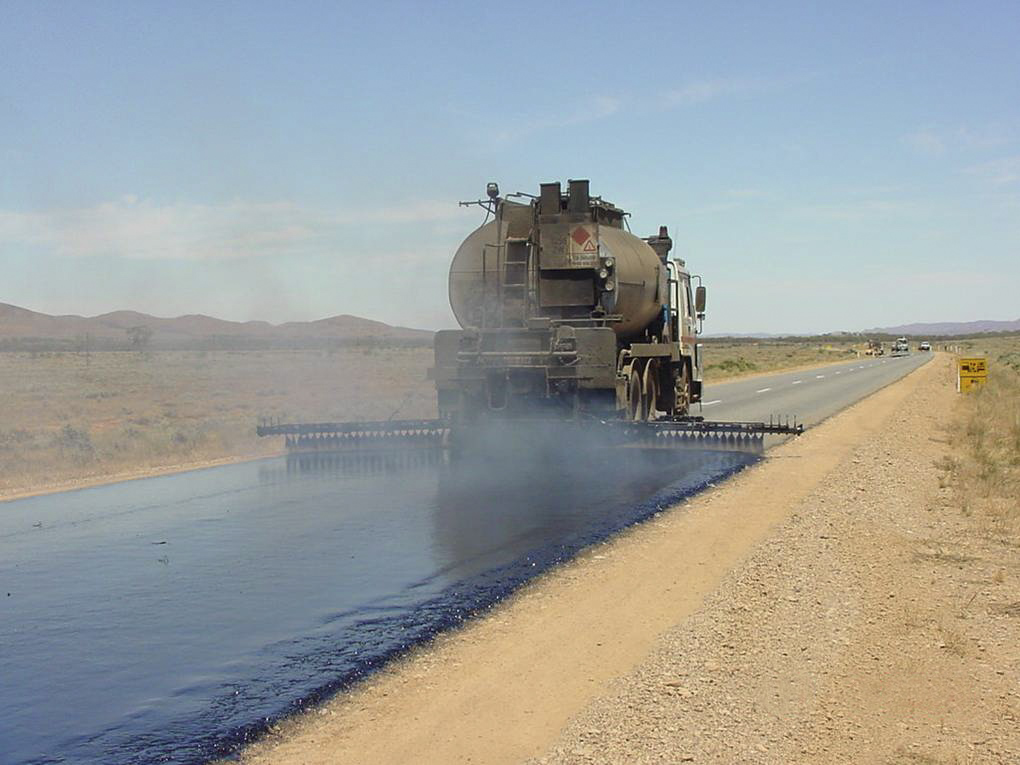 In some cases, multiple applications of binder and aggregate are used to provide more substantial treatments.

Bitumen binders can also be modified with the addition of polymers or crumb rubber to provide improved aggregate retention in areas of high stress, or a thicker, more flexible membrane for improved waterproofing and reduction in crack reflection. Multigrade bitumens are another form of modified bitumen for special applications.

Hot bituminous binders may be cut back with a cutter oil, such as kerosene, to temporarily reduce viscosity and enhance aggregate adhesion in cool conditions. More cutter oil is used for initial seal binders to assist with adhesion to a base. Greater proportions of cutter oil are added to make lower viscosity products for priming.

A further means of liquefying bitumen is by emulsification. Such binders can be sprayed at ambient temperatures or warmed to temperatures up to 90°C. Emulsions can be used in sprayed seals for many of the applications of hot bitumen. The advantages include less heating, reduced use of cutter oils in cool conditions and improved adhesion to damp surfaces in some circumstances. The disadvantages include a higher cost due to the expense of emulsification and a slower rate of strength gain that increases the time before seals can be trafficked, particularly in cooler conditions.

All binders used in sprayed sealing work are derived from oils obtained from the refining of crude oil. Other products formerly used in sprayed sealing work included tars obtained from the destructive distillation of coal. Town gasworks provided a cheap source of tars that were widely used for priming and initial sealing due to superior penetration and adhesion properties. Poor durability and poor temperature susceptibility made tars largely unsuitable as sealing binders. With the introduction of natural gas and liquefied petroleum gas, the manufacturing of gas from coal gradually ceased. At around the same time it was also realised that tars posed a serious health risk, and are no longer used for sprayed sealing work, regardless of availability and cost.

On a strong pavement, the performance of sprayed seals deteriorates through gradual hardening of the binder. Eventually the seal will require maintenance intervention due to loss of aggregate or minor surface cracking which may result in a weakening of the underlying pavement. Damage to the underlying pavement is likely to require substantial repairs. A system of planned periodic maintenance to resurface sprayed seals before they reach a critical level of deterioration (which leads to loss of overall pavement performance) is most important in the management of roads surfaced with sprayed seals.

Sprayed seal performance can also deteriorate because of aggregate wear and polishing or aggregate embedment leading to loss of surface texture and reduced skid resistance, particularly in wet conditions. Deterioration may also occur due to loss of aggregate or through flushing of binder as a result of incorrect design of application rates or poor work practices.