Embedment allowance compensates for loss of voids in the seal under traffic due to the aggregate being forced into of the substrate. This depth of embedment will depend on the volume and mass of traffic and the condition (hardness) of the surface being sealed.

Embedment problems can generally be recognised by the fact that the wheelpaths will become flush in a very short time period (within weeks), while the remainder of the seal remains coarser textured. Long‑term, very slow reduction in texture is a separate issue and not part of this step in the design process.

Embedment on pavement and primes

Embedment of aggregate may occur in initial treatments applied over:

Typical embedment allowances (in L/m2) are shown in Figure 6.5. Pavement surface hardness should be determined in accordance with Austroads (2010c). 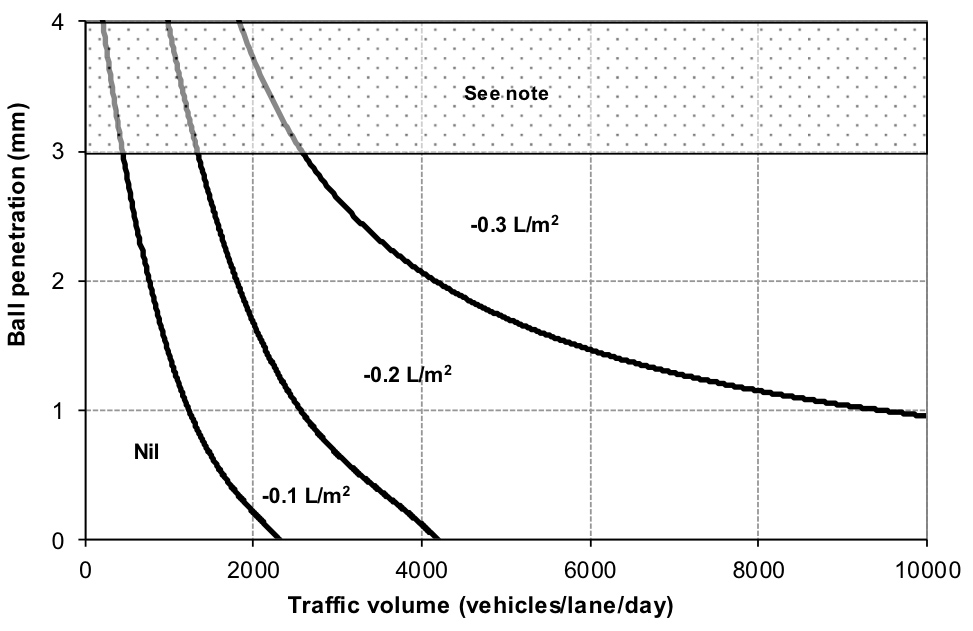 Note: It is recommended that the following alternatives be considered where the ball embedment value exceeds 3 mm:

To minimise potential risk of flushing/bleeding it is recommended that:

Embedment of aggregate may occur in reseals:

Where the binder in the existing seal is relatively soft, some embedment may occur. The ball penetration test (Austroads 2010c) has been found to provide poor correlation with field performance for flushed bitumen surfaces and further research is required to determine appropriate allowances. In the meantime, designers must apply their own judgement in providing suitable allowances. Where surfaces are severely flushed, alternative treatments may need to be considered. Alternative treatments may include: