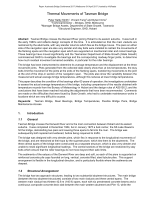 Tasman Bridge crosses the Derwent River joining Hobart to its eastern suburbs. It was built in the early 1960’s and reflects design concepts of the time. It is articulated so that the main viaducts are restrained by the abutments, with very slender columns which flex as the bridge moves. The piers on either side of the navigation span are also very slender and stay bolts were installed to restrain the movements of the flanking spans and the navigation span which are supported on mechanical roller and rocker bearings. These bearings have moved significantly and the Tasmanian Department of State Growth (State Growth) commissioned GHD to investigate the bearings and the corresponding roadway finger joints, to determine how much residual movement remained available, in particular for the roller bearings.

The bridge has been instrumented to determine its average temperature and the displacement at the three movement joints. Plots generated from the collected data clearly show that, at low temperatures, the stay bolts limit the movement of the joints at the ends of the flanking spans, transferring movements to the joint at the end of the drop-in section of the navigation span. The plots also show the variability between the measured and actual average bridge temperatures, although this reduces at lower bridge temperatures.

This paper describes the condition of the bearings after 60 years of operation; the investigations undertaken to assess the actual average temperature of the bridge, including comparisons of the results obtained with temperature records from the Bureau of Meteorology in Hobart and the design rules of AS5100.2; and the conclusions that have been reached including the adjustments that have been recommended. Comments are made on the difficulties that were faced by State Growth, who had to undertake maintenance works in locations which are very difficult to access.