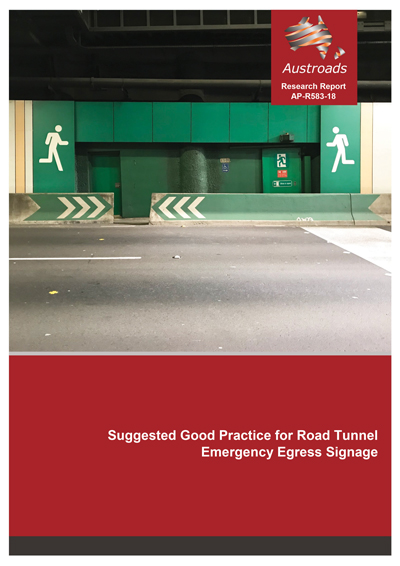 This report provides guidance on consistent, efficient and safe design of emergency egress signage and operations in road tunnels.

While there are Australian Standards relating to emergency egress signage, these were not originally intended for use in road tunnels until they were referenced by AS 4825: Tunnel Fire Safety in 2011. In the absence of an AS/NZ design standard that is specifically intended for use in road tunnels, jurisdictions have developed bespoke requirements for road tunnel emergency signage. The requirements vary between jurisdictions and between tunnels within the same jurisdiction, reflecting requirements that have evolved from project to project in the absence of a standard that recognises the fire safety hazards specific to road tunnels.

Most motorists would have no experience of evacuating a road tunnel. While fire drills are conducted in buildings to familiarise occupants with evacuation routes, this is not possible for tunnel users. Additionally, most buildings follow a standard evacuation process which involves descending a fire stair to the ground level and exiting the building. Due to the length, varying alignment and arrangement of road tunnels, occupants can be exposed to numerous evacuation route types.

Consequentially, providing clear instruction and direction to tunnel occupants during an incident is vital for successful self-evacuation activities. A key component to provide this direction is the provision of emergency egress signage within the tunnel.