Historically, separate stand-alone systems have been developed for motorway traffic management, i.e. separate VMS, VSL, travel time, ramp metering etc. However, the sub-systems within the smart motorway system are integrated to the extent that management and interaction is essential. Even though the hierarchy of sub-systems may change according to the circumstances, the sub-systems are still inter-dependent in the way they operate. Without integration the operators would be faced with a significant challenge due to the complexity of the interaction required, particularly during an incident.

The hierarchy of sub-systems during default (normal) operation is shown in Figure 8.1. Default operation occurs when there are no incidents and the system is safely optimising throughput and travel speed.

During an incident, the lane use management system (LUMS) becomes the dominant sub-system to control lane use and speed limits as shown in the hierarchy (Figure 8.2).

Figure 8.2: Hierarchy of sub-systems during an incident 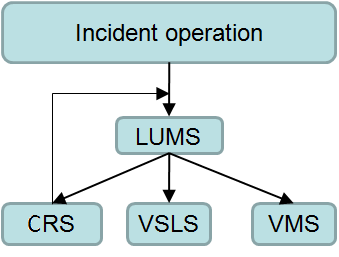 In either mode of operation, the management system provides automated operation that works within pre-defined rules, generally with minimal operator input unless override is necessary.