The definition also applies to events conducted in their own venue if the event requires special traffic management arrangements and multiple-agency support.

Special events may range in scale and impact from the large, e.g. a marathon run impacting on principal transport routes in a city, to the small, e.g. a neighbourhood street party. How they are managed from a traffic perspective clearly will depend on the scale of the event, as will the number of agencies that need to be involved in its planning and subsequent management. The scale also determines the extent and degree of planning required to address the traffic aspects.

Figure 5.4 shows a typical process for dealing with a special event application. The objective at this point is to determine the scale of the event and the planning processes that will therefore need to be followed. Note that it involves relevant agencies at an early stage. Note also that different jurisdictions may have different agency roles and requirements, particularly regarding the initial point of contact by event organisers. 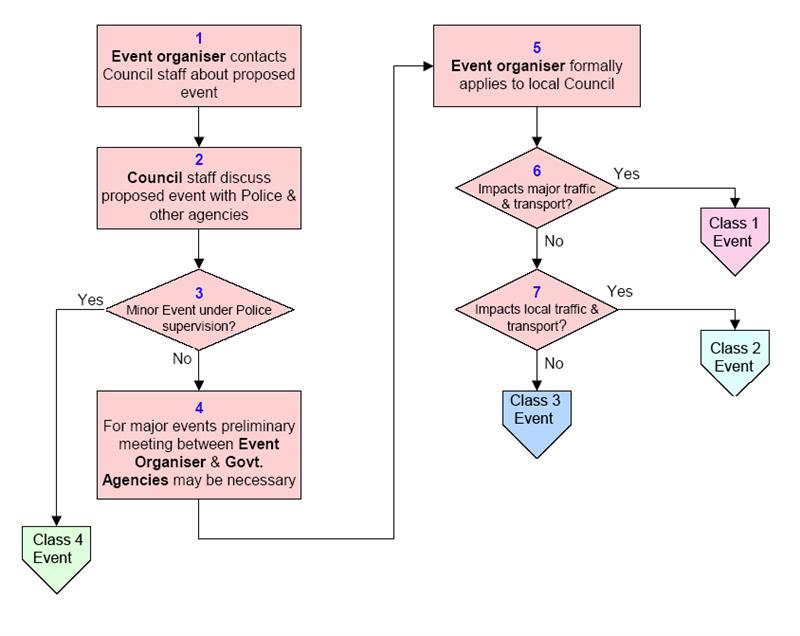 Notes:
Event classification in this example follows the model in Table 5.4.
Different jurisdictions may have different agency roles regarding the initial point of contact by event organisers.

Table 5.4 offers one model for categorising special events, and shows a planning matrix for each class of event. Note that this is only one of a number of possible models. Different jurisdictions may have different agency roles and requirements, but the matrix in Table 5.4 is indicative of the planning issues that must be addressed.

Other issues that may be included for each event class in the matrix are:

Appendix A shows an example of a transport management plan template (Roads and Traffic Authority NSW 2006). It illustrates the planning requirements for the top three classes of special event, using the event classifications described in Table 5.4. Appendix A functions as a high level planning checklist, ensuring that the following traffic and transport issues are addressed:

Note that all events, other than very minor ones which, in the example classification require only police approval, require a traffic control plan (TCP) which details the use of traffic control devices (e.g. signs, barriers) to ensure the safety of road users during the event. This would normally be required to be of the same standard expected of a TCP for roadworks. Australian Standard AS 1742.3 and CoPTTM1 provide details of traffic control devices and layouts which can form the basis of a special event TCP. It may also be a requirement that the TCP is prepared by a qualified person where the jurisdiction operates such qualification schemes.

The TCP can be seen as a risk management plan, demonstrating by its standard and its preparation by qualified personnel that the event organiser is discharging the duty of care (in this case to road users) required under common law or legislation.

There are a number of resources that can assist the preparation of transport management plans and TCPs. In particular the US Federal Highway Administration (FHWA) has a comprehensive series of checklists in its manual Managing Travel for Planned Special Events (Latoski et al. 2003) which is available from the FHWA web site. Appendix B shows some of the checklists. Another checklist, shown in Appendix C, draws on the example of the Hamilton, New Zealand, V8 street race to show the range of issues requiring consideration.

During the execution phases of a special event each agency provides appropriate support as negotiated during the planning phase. It is important to note that the operational conduct of an event largely remains the responsibility of the event organiser though the overall command of an event is vested in a command group.