Phasing design is the combination of all necessary traffic movements into a plan that describes the way movements should interrelate. The choice of phasing system depends on:

Phasing designs need to take into consideration safe system principles and minimise the risk of crashes which typically result in serious injuries or death. Based on data from New Zealand and Victoria, Austroads (2017a) found that the most common fatal and serious injury (FSI) crashes at urban signalised interactions are:

Phasing design should also consider safety implications of intersection signal operation during low demand periods when normal phase sequencing may not occur due to phase skipping. It is desirable to have consistency in phasing arrangements both generally and at similar intersections. This is particularly important where intersections with similar characteristics and appearance are closely spaced.

The phasing arrangement at a signalised intersection is defined by the type of phasing adopted for right turning traffic. Figure 6.8 presents definitions of basic elements of phasing alternatives that are applicable to cross or T intersections and can be adapted to intersections with more than four approaches. For clarity, movements stopped by red displays are not shown in the full phase sequence diagrams. Turning movements that give way to opposing vehicle or pedestrian movements are shown as broken lines.

Crashes involving right turning vehicles and opposing through traffic pose a significant road safety risk at signalised intersections, being the most prevalent crash type resulting in fatal and serious injuries. Accordingly, full signal control of right turn movements is preferred. Filter right turns should only be used following an assessment which demonstrates that the road safety risk is low.

A risk assessment or Safe System assessment can help determine the road safety risk. This assessment should consider exposure (i.e. traffic volume), likelihood (i.e. speed, the geometry of the turn and the available sight distance) and the likely severity of a collision (i.e. speed and impact angle). Regardless of risk, the right turn must be fully controlled (no filter) where any of the following apply:

Where existing sites with filter right turn movements exist outside of the above requirements, a prioritisation program should be developed to reduce road safety risks.

Crashes involving pedestrians are also a significant source of FSI crashes at urban signalised intersections (Austroads 2017a). As far as is reasonably practicable, pedestrian movements should be protected by the signal phasing. This applies particularly to conflicts between right turning vehicles and pedestrians. Options for pedestrian movements include:

Audio-tactile traffic signals should be provided. Staged crossings should be used with care as they usually increase crossing delays and may therefore result in increased risk taking by pedestrians.

If the phasing arrangement includes phases for special vehicle types (such as public transport priority phases) they must not run in conflict with pedestrian phases.

Left turn and pedestrian movements are also not shown in Figure 6.8 for reason of clarity. Left turn movements do not control phase selection.

The basic phasing elements in Figure 6.8 show movements on one road only, say an East‑West road. The leading, lagging and repeat right turn phasing options are shown in terms of the right turn movement from the west approach, but they are equally applicable to a right turn movement from the east approach. Similarly, the split-approach and the lead-lag phasing options can be in reverse order (i.e. east approach first). These phasing elements can be used to build a total phasing arrangement (i.e. a complete signal cycle) for the intersection. 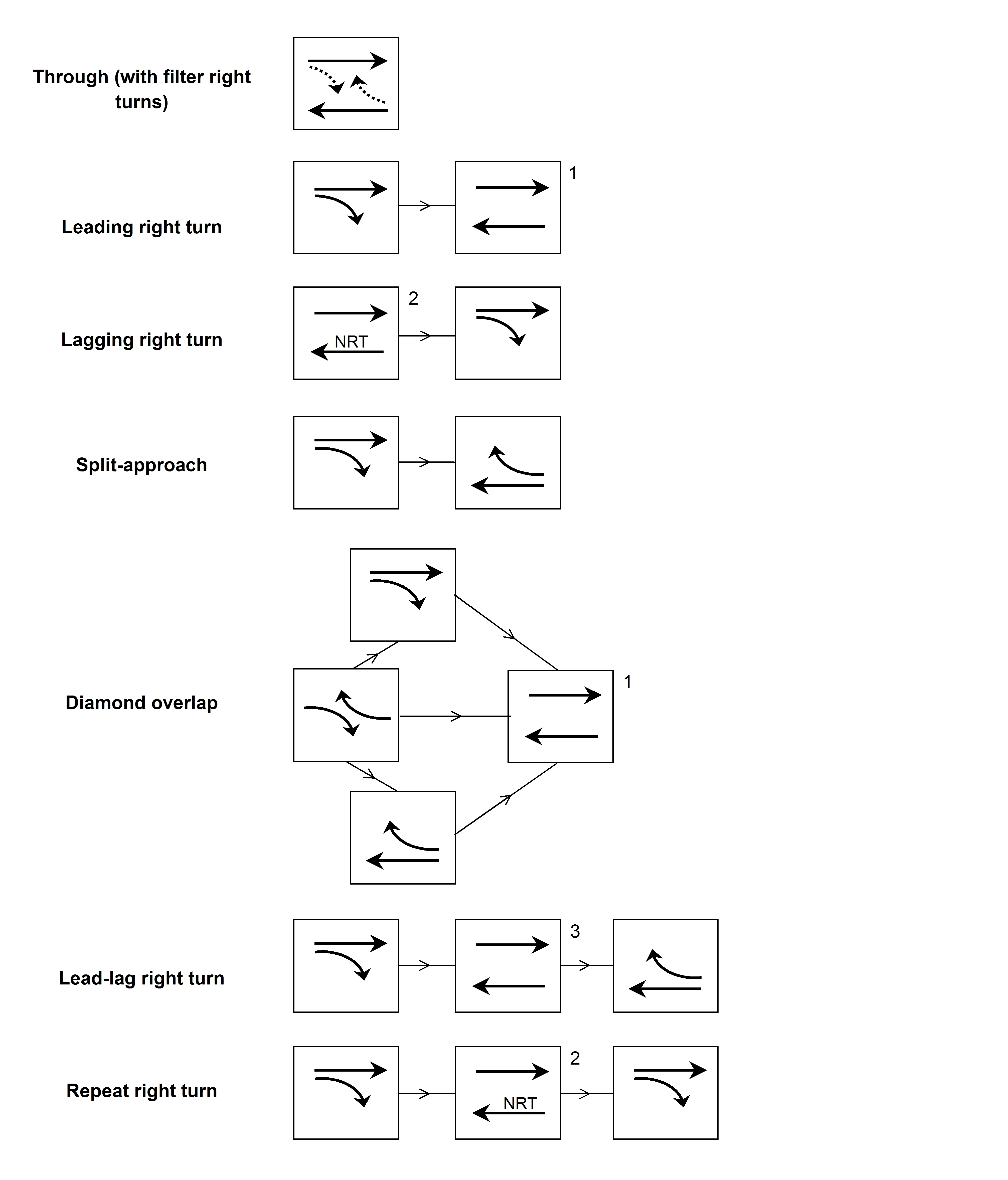 NRT: No Right Turn (right turn movement must be banned where opposing through movement overlaps).
For clarity, left turn and pedestrian movements are not shown.

Safety assessment and consideration of safe system principles should be undertaken when designing the geometric layout and phasing for signalised intersections. Signalised intersections that have been designed to traditional standards are not considered to be fully Safe System compliant because collisions that occur as a consequence of road user error can result in serious injury or death. The risk of serious crashes, contributing factors and alternative designs for signalised intersections have been the subject of recent studies, including Austroads (2015 and 2017a), Turner et al (2012) and Durdin et al (2016). Findings from these studies include:

For all phasing options shown in Figure 6.8 (except the split-approach phasing), providing an exclusive right turn lane is recommended in order to:

Where a right turn is banned for part of the time using a switchable electronic sign, the switching of the sign should be coordinated with the signal displays in order to obtain a safe transition. If the right turn movement is arrow controlled, the sign should preferably switch on at the same time as the arrows change from a yellow display to a red display or red arrow drop-out.

The following are examples of basic phasing systems. However, phasing arrangements can be complex in many situations, including:

While Figures 6.9, 6.10 and 6.11 show filter right turns, full control of right turn movements is preferred and should be the default phasing for right turns. Filter right turns may be permitted (with or without a right turn phase) following an assessment which indicates that the risk of FSI crashes is low having regard to the crash risk factors list above.

Appendix E presents an example of signal design comparing the impact of different traffic signal phasings, as well as other design changes.

The simplest signal phasing at an intersection involves two through phases with filter turns and parallel pedestrian movements as illustrated in Figure 6.9. For clarity, movements stopped by red displays are not shown in the full phase sequence diagrams. Turning movements that give way to opposing vehicle or pedestrian movements (filter turns) are shown in broken lines. By allocating right of way to each road alternately, the two-phase system eliminates all crossing conflicts between through traffic movements but retains 16 other conflict points (Commentary 6). 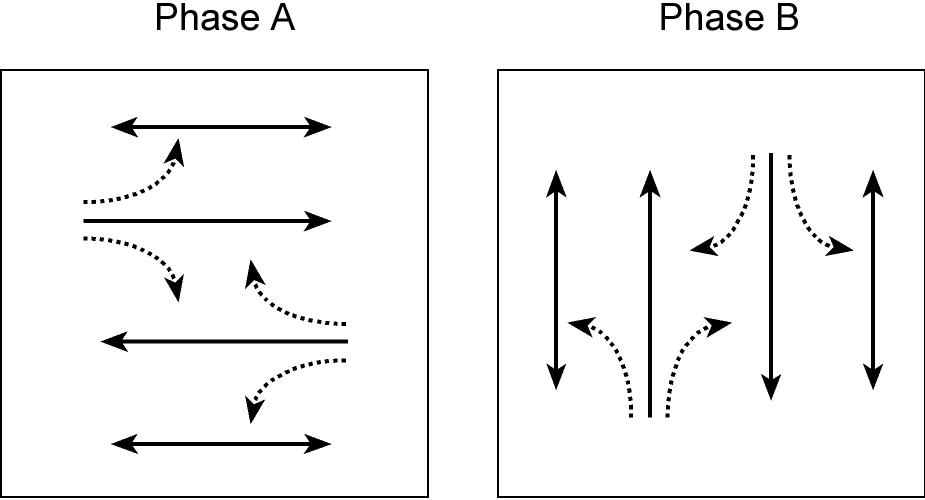 With lagging right turn phasing, a ‘right turn trap’ situation can occur and lead to crashes. This is because the filtering right turn vehicles would face a yellow circle display while the oncoming through traffic (from the west approach in Figure 6.11) faces a green circle display during the phase transition (from Phase A to Phase B). This situation also applies to T-intersections with filter U‑turns (where permitted under local road rules).

In this case, a driver who wants to turn right by filtering at the end of the first phase from the direction opposing the lagging right turn (right turns from the east approach filtering at the end of Phase A in Figure 6.11) will see the signal display changing to yellow. The driver may think that the signals change to yellow for the opposing traffic from the west approach in Figure 6.11 at the same time, and therefore proceed and run into an opposing through vehicle for which the signal display would still be green (‘right turn trap’).

If the right turn movement from the direction opposing the lagging right turn cannot be banned, this conflict situation must be avoided by:

Table 6.7 provides a summary of the types of right turn phase and their characteristics. Details of the signal displays are provided in Part 10 of the Guide to Traffic Management (Austroads 2019d).

Table 6.7: Summary of types of right turn phases and their characteristics