Each possible trajectory of traffic flow is called a movement. At a typical four-way intersection, each approach to the intersection can accommodate three movements:

In the simple intersection shown in Figure 6.5 there are three movements in each approach for a total of 12 movements.

Figure 6.5: Vehicle movements at an intersection 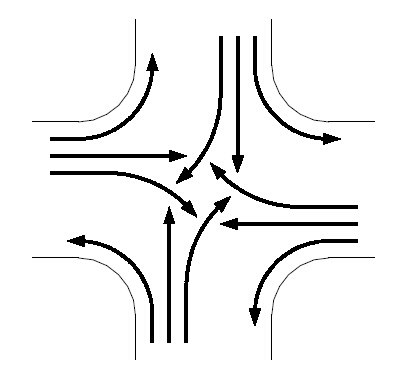 The maximum of seven phases operated by a controller are labelled A to G. In some cases, phases may have options within the same phase, e.g. E, E1 and E2. Only one phase can be ‘running’ at any one time. Phases are typically serviced in alphabetical order (although this is not essential) and phases may be skipped if they are not demanded. Selecting a phasing design for a particular intersection depends on the traffic flows of vehicles and pedestrians for each movement.