There are numerous options available for signal coordination. These options fall into three basic categories in terms of hardware architecture (Lowrie 1996, 2001):

Local interlinking: these systems comprise a small number of closely spaced signals, interconnected by a cable which allows the operation of one signal to affect the operation of the others. In such systems, usually one of the signal controllers assumes the role of master and may contain a number of timing plans to suit traffic conditions at different times.

A variety of local interlinking systems have been used in the past. They have now been replaced by wide area control systems.

Synchronous linking: The synchronous (or cableless) linking system can be applied to a large system of signals without relying on a central computer (e.g. the SCATS Flexilink mode of operation as discussed later). Coordination of signals is achieved by reference to an accurate clock in each signal controller. These clocks are initially set to exactly the same time and synchronised by reference to the mains supply frequency.

Each controller contains one or more signal timing plans and a weekly schedule for the introduction of the plans according to the time-of-day and day of the week. The timing plans include the cycle time and green splits to be used and, because the clocks are synchronised, the cycle position of each controller can be synchronised. This allows offsets to be specified and maintained. Synchronous linking uses a fixed cycle time but allows local vehicle actuation of minor phases within the constraints of the timing plan.

Although they provide a low-cost solution, cableless linking systems pose serious problems in maintaining the clocks in synchronism, even in cities with reliable mains power. However, synchronisation of the signal controller clocks can be maintained using a ‘dial-in dial-out’ system. This system can be programmed to call each site in a linking system at regular intervals to synchronise the signal controller clock. The dial-in dial-out system can also be used to modify linking data as well as monitor on-site operation.

Synchronous linking is the fall-back mode of operation in some wide area control systems for use when the central control computer fails.

All signals in centrally controlled systems are connected to the traffic control computers, usually by leased data lines or, in some cases, by dedicated cable systems.

In Australia and New Zealand, SCATS is widely deployed (Lowrie 1982, 1992, 1996, 2001; Charles 2001) except in Queensland where the STREAMS system is also in use. The SCATS system is used in many cities around the world. Typical system architecture used in the PC-based SCATS 6 system is shown in Figure 6.19. For a detailed description of the SCATS system, refer to Lowrie (1996). 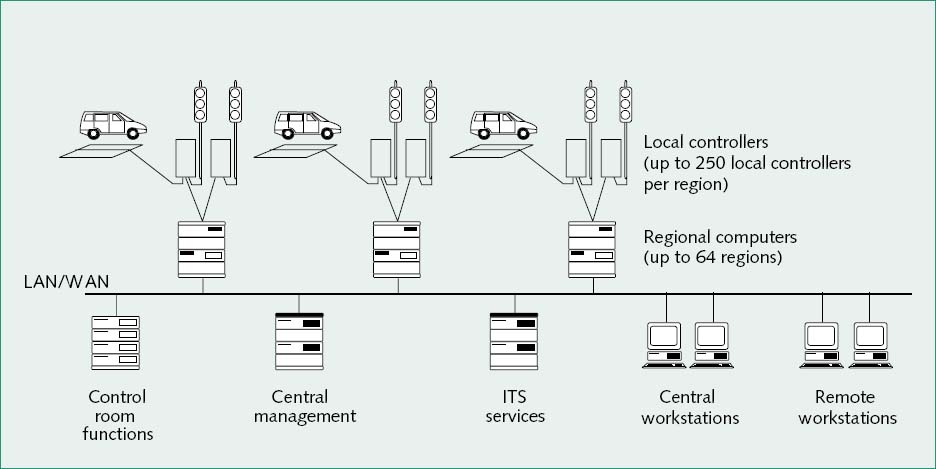