An extension of the fundamental relationships is to consider speed, flow and density as functions of time (t) and space (x), and the three parameters are not independent of one another. For example, flow is a function of density k, which is a function of time t. A model that considers the traffic process in time and space is the kinematic wave model of Lighthill and Whitham (1955), which is more suitable for high density conditions and therefore has its place in analysing flow breakdowns.

The kinematic model assumes that high density traffic will behave like a continuous fluid (hence also called a continuum model). Consider the flow in and out of a short length of road \(\mathrm{\partial x}\). The condition of continuity requires that if the density of vehicles has increased it must have been due to a difference in the amounts flowing in at one end and out at the other, or

With q as a function of density k, Lighthill and Whitham developed Equation 2.10 further into the LW model as follows:

Define below a wave speed U that represents the speed of waves carrying continuous changes of vehicle flow in a traffic stream:

Because speed decreases with density, \(\frac{\mathrm{\partial v}}{\mathrm{\partial k}}\) is always negative (Figure 2.4) and the wave speed U is therefore always less than the space mean speed v.

The relationship between space mean speed (v) and wave speed (U) are illustrated in the flow‑density diagram in Figure 2.5, which also shows the shock wave speed (USW). The following observations can be made (Wohl & Martin 1967): 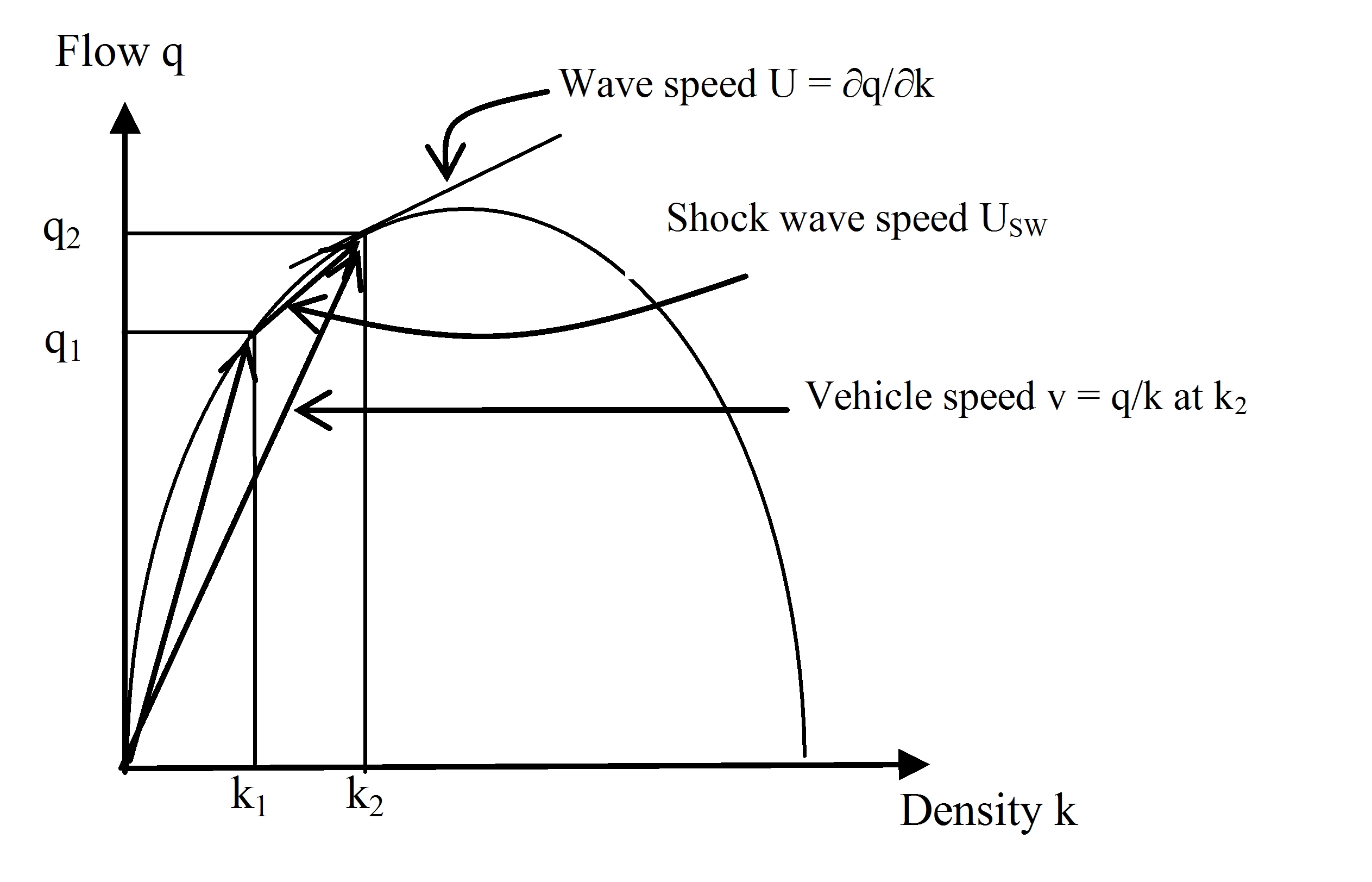 Figure 2.6 illustrates the case for a negative shock wave speed due to capacity decrease at a bottleneck (e.g. lane drop) on a freeway. Two fundamental diagrams are required. The inner diagram represents the characteristics of the bottleneck with capacity qb less than the approach section. If the approach flow is larger than qb, a complex queuing situation occurs at the entry to the bottleneck.

Edie and Foote (1958) reported how shock waves were generated at an upgrade leading to the Holland Tunnel exit in New York. The shock waves propagated backward towards the tunnel entry with inefficient traffic flow. The solution was to control the entry of vehicles into the tunnel so that the entry flow did not exceed the capacity of the bottleneck section. The vehicles entered in short platoons of about 40 veh every 2 min with a 10 s gap between platoons.

Figure 2.6: Fundamental diagrams of a bottleneck section and the approach section 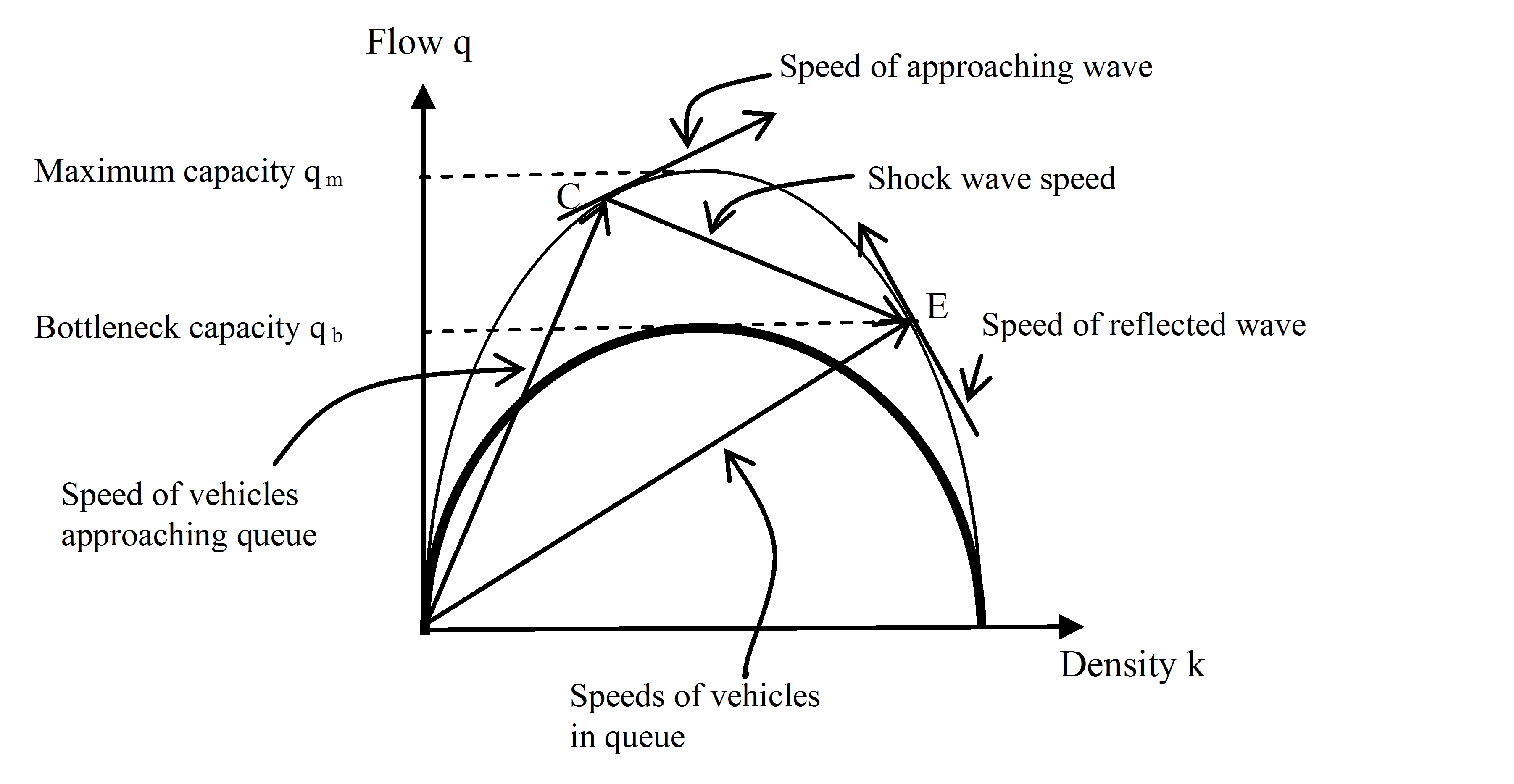 The kinematic model can be solved using the finite difference (or finite element) method and has continued to be an interesting area of research (see, e.g. Leo & Pretty 1992, Michalopolous 1988, Ngoduy, Hoogendoorn & Van Zuylen 2006, Papageorgiou 1983, Payne 1971). At the University of Queensland, Leo and Pretty were able to model the propagation of congested density upstream in a freeway lane drop situation. They also modelled the platoon movements in a pair of coordinated signals at very small, discrete levels of time (0.5 to 1 s) and space (about 15 m).

The LW model is a first order model with limitations such as (Papageorgiou 1998):

Assume that outflow (qb) at a freeway bottleneck is best achieved with some congestion at the bottleneck entry. This is equivalent to assuming that the outflow cannot be increased by avoiding mainline congestion, i.e. no control. The reality is that some control of a bottleneck (if possible) can improve throughput.

The use of Kinematic models in understanding freeway flow breakdowns is discussed further in Section 7.5.4.