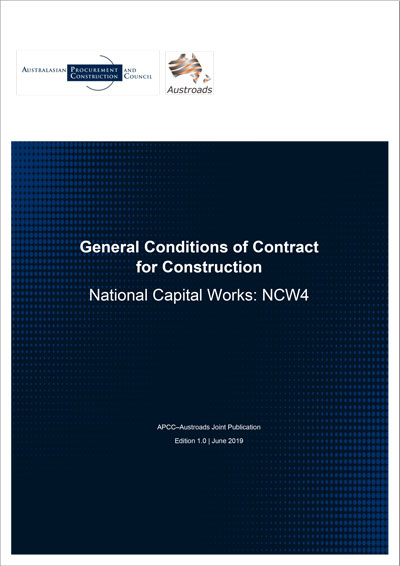 General Conditions of Contract for Construction - National Capital Works 4 (NCW4) has been developed for use in “construct only” contracts where the principal is a government or semi-government agency. While users of Australian Standards Contracts AS2124 and AS4000 will be familiar with many of the concepts used, NCW4 adopts contemporary contract drafting practice and addresses legislation such as Security of Payment, Personal Property Securities, GST and Work Health and Safety.

NCW4 has annexures, which are completed for a specific contract, as follows:

NCW4 is accompanied by a set of Explanatory Notes which provide background and commentary for each clause in NCW4.

It is expected that each state and territory using NCW4 will amend to address local legislation and policy and publish a State based NCW4. The APCC website will host both the Master version and links to State versions where they exist.

In August 2019 version 1.1 of the documentation was published. Version 1.1 includes: