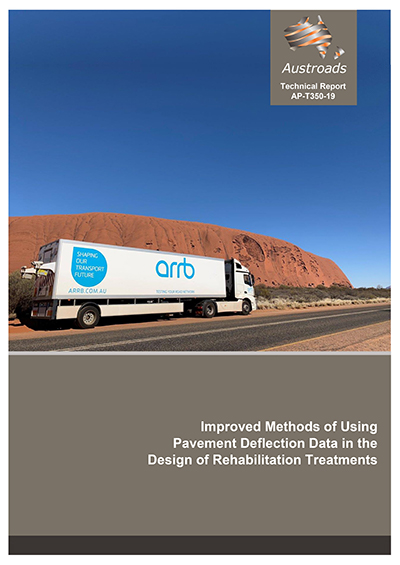 New methods of using pavement deflection data were developed in the context of pavement structural rehabilitation treatment design. The project focused on two main components. The first was to assess the potential use of traffic speed deflectometer (TSD) deflection for the design of pavement structural treatments. The second component included formalising the pavement layer moduli back-calculation algorithm for use in mechanistic‑empirical pavement treatment design.

Using two databases of paired falling weight deflectometer (FWD) and TSD, a regression analysis of the deflection bowls allowed the determination of a robust relationship between maximum deflections measured by the two devices. The regression analysis did not allow the development of a process to predict deflection bowls equivalent to FWD measured bowls from TSD measured data. However, the regression parameters obtained for maximum deflections formed the basis of a deflection standardisation factor for the TSD proposed for the empirical design method of granular overlay.

The algorithm suitable for the determination of pavement layer moduli from pavement surface deflection is detailed and described in the report based on previously used back-calculation methods. The project further developed the algorithm by adding optional features for the subgrade layer moduli and the sublayering process for granular layers. The proposed algorithm was tested using deflection data from case studies. The benefits of the optional features were also demonstrated.

There are no related publications.