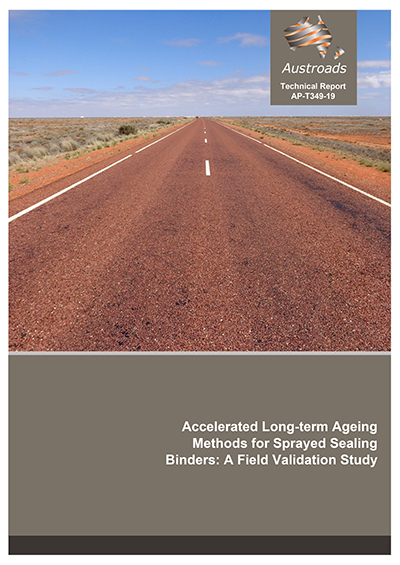 This report presents the results of a field-validation study conducted as part of the development of a new long-term ageing test for polymer modified binders used in sprayed seals in Australia.

Unaged samples of binders were collected during the construction of two Austroads sprayed sealing trial sites in 2011–12 (Coober Pedy in South Australia and Cooma in New South Wales). These binder samples were then artificially aged in the laboratory using a pressure ageing vessel (PAV) for 30 or 72 hours. Field-aged binder samples were also collected about three and/or six years after the trial sites were constructed. These two sets of differently aged binders were then characterised using dynamic shear rheometer stress ratio tests and Fourier transform infrared spectroscopy tests to investigate the differences between laboratory and field ageing.

The study found that the PAV-treated binders had broadly similar properties to those of the field-aged binders, which suggested that PAV-treatment produces binders with similar properties to those aged in the field. The results obtained in the study indicate that 50 hours of PAV-treatment corresponds to about six years of field ageing at a moderate climate sprayed seal site in Australasia.