The capacity of a parallel flow drum mixer (Figure 5.5), in tonnes per hour, depends primarily on the drum size, but the effective production rate is also influenced by moisture content of the aggregate. The single most important factor affecting the production rate of a particular size of drum mixing plant is the moisture content of the aggregate entering the mixing drum.

Accurate calibration and control of the cold feed is of great importance in all continuous mixing processes. Proportioning is carried out with damp aggregates and compensation must be made for the moisture content of the aggregate.

Proportioning of individual aggregates in this system is controlled by variable-speed belt feeders on each individual cold feed bin. The area of the opening above the feed belt may be further regulated by means of an adjustable gate opening that is set or locked into position. The mass of cold feed aggregates may be determined from weigh cells on each individual belt feeder, which also control the individual aggregate feed rate, or from a single load cell for the combined aggregates on the cold feed conveyor. Electronic scales for the aggregate feed rate are interlocked with a variable speed bitumen pump so that a pre-set bitumen content is constantly maintained.

Particular care must be taken to remedy flow deficiencies such as:

Warning devices must be fitted to indicate a lack of material and continuous monitoring is essential. 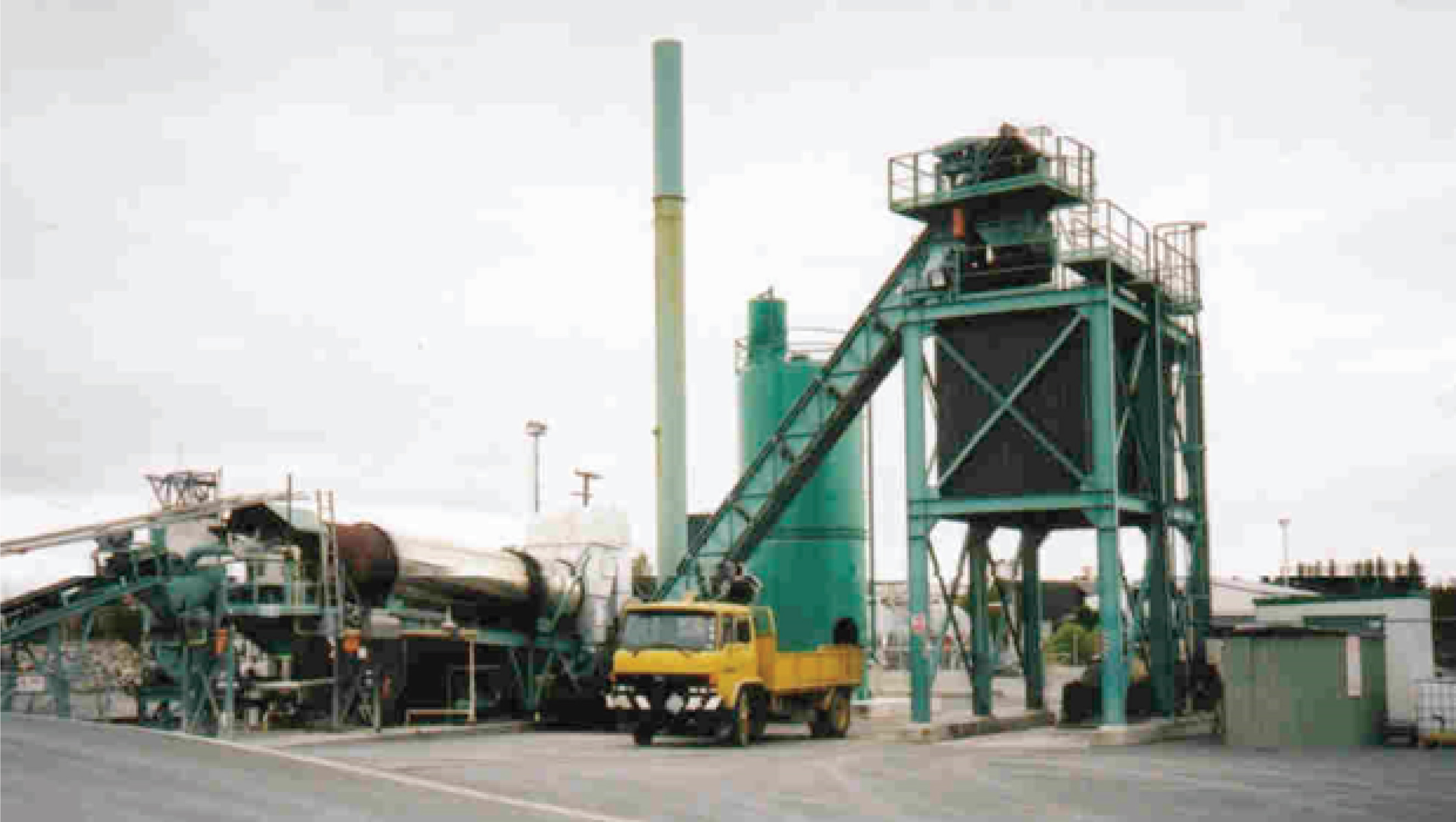 The mineral filler is fed by an enclosed screw feeder powered by a variable-speed motor that is operated and controlled in a similar manner to the cold aggregate.

Some older drum mixing plants deposit the filler on the belt at a point where it will be almost immediately covered by aggregate. This is designed to minimise loss of filler entering the dryer drum but some loss may still occur through the gas extraction system and allowance for this must be made in the proportioning of ingredients.

The preferred method of feeding mineral filler is to feed the filler directly into the dryer drum in a similar manner as the binder. This has the advantage that it minimises the potential loss of added filler through the dust collection system.

Positive interlock is provided between the flows of aggregate, mineral filler and binder, so that the relative proportions can be maintained independently of variation in the total feed rate.

The binder is generally introduced from a feed pipe extending around one-third of the distance from the outlet end of the drum.

Mixing takes place in the rotating dryer drum. The time taken for material to pass through the drum may vary from three to five minutes.

Parallel flow drum mixers are designed so that binder does not come into direct contact with the burner flame and so that mixing is accomplished in an inert atmosphere of water vapour and spent gases of combustion. These factors combine to lessen hardening of the binder.

Mixed material leaves the end of the drum and is conveyed into a surge bin from which it is loaded into trucks.

As the aggregate is coated with binder as it is dried, most of the fines are trapped in the mix. There will however be some airborne dust which must be collected in a similar manner to that previously described for batch mixing plants.

The most common method of adding RAP to a parallel flow drum mixing plant is the use of a split feed with separate inlets for new materials and RAP. RAP is fed into the drum part way along the drum using a special collar (Figure 5.4).

Addition of RAP requires drum flight systems to be modified to ensure that the virgin aggregate forms a shield between the flame and the RAP, preventing overheating.