A crushing plant controls particle size distribution. Different crusher types and crusher settings are used depending on the characteristics of the parent rock. The particle size distribution of the end-product is mainly controlled by screens. Screen variables that can be controlled include aperture size and shape, screen angle, vibrating speed and direction. Once the system is set up and is stable, the plant generally only requires resetting daily.

Massive hard rock deposits must be broken by blasting or ripping to reduce the rock to a size that can be fed to the crusher. Any new crushing operation requires consideration of the size of rock likely to be won initially by the blasting or ripping, as secondary blasting, if required, is costly.

The range and distribution of the particle sizes and shape of aggregate are largely determined by the relationship between the rock type and the crusher types and settings. Therefore, it is necessary to select a crusher suitable for the particular application. The South Australian Department of Mines and Energy, Handbook on Quarrying and relevant publications of the Institute of Quarrying are considered appropriate references for those wishing to specify the types and number of crushers to be used to produce a nominated aggregate from a particular source rock.

In terms of crushing, there are six principal types of rock crushers used in the manufacture of road construction materials viz:

All crushing relies on either compressing rock particles between two metal surfaces or by the high speed impact on or by rock particles against hard surfaces. Rock crushing can also be achieved by rock on rock contact to improve shape. Rock on steel contact promotes fracture whereas, rock on rock contact tends to promotes shape. Depending on the type of material being crushed, there are some characteristics, like particle shape and Atterberg Limits, which can be influenced by the inherent nature of the rock. The selection of the appropriate crusher type etc can modify these characteristics to some extent in the final product. Quarry plants are designed and established to provide efficient and cost-effective extraction, processing and sale from a given deposit and are usually built as a one off.

The Jaw crusher (see Figure 4.1), which is the basic style of crusher has 2 hardened metal plates with a tapering gap between. One metal plate is fixed (fixed jaw) and the other (swing jaw) oscillates causing the taper to alternately open and close. In simple terms, the feed particles fall into the taper to the point where the open jaw separation matches their size; as the taper then closes, the particle is compressed and fractures. The broken particles then drop further down the taper either to be caught again or eventually fall through the gap at the bottom of the taper. The eventual maximum size of the material is controlled by the gap. Some particle on particle crushing occurs in the process; this is more likely to occur if the crushing chamber is kept full.

The gyratory crusher (see Figure 4.2) uses an eccentrically mounted tapered spindle rotating within an inverted static cone; the rotary oscillation of the spindle causes a progressive rotary closure of the gap between the cone and the spindle. The profile between the crushing surfaces is similar to that of the jaw crusher and the crushing process is likewise similar.

Cone crushers (see Figure 4.3) operate in a somewhat similar fashion to the gyratory crusher but with a significant difference in the shape of the crushing surfaces (cone and mantle) and the crushing chamber. The longer chamber shape and flatter lying orientation causes a higher degree of stone on stone contact which results in the production of finer particles by grinding actions rather than breakage by direct particle compression. This type of compression crusher is considered as more suited for the production of more material in the fine particle range as well as more equant shaped particles. A variety of cone and mantle profiles are available to suit the properties of various rock types and perhaps modify their inherent crushing characteristics according to product requirements. 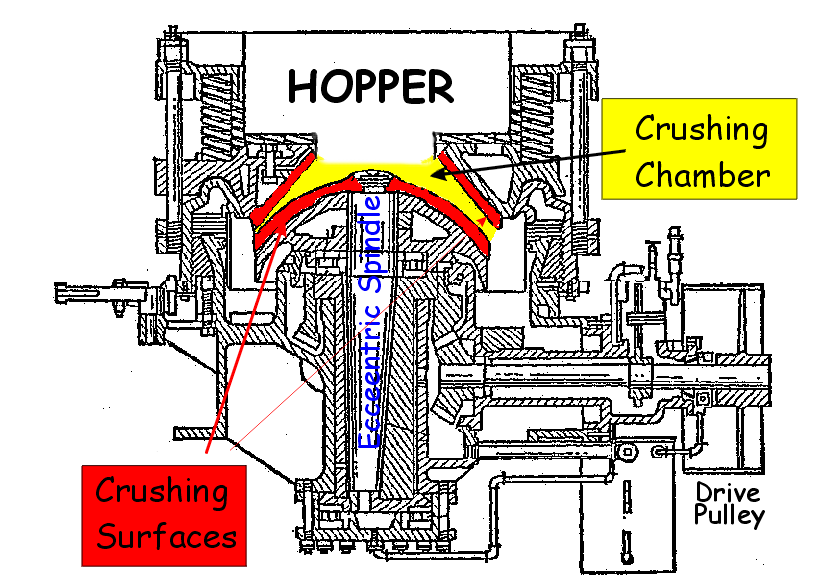 Impact crushers rely on the high speed impact of rock particles against a hardened metal surface. This can be either as a hammer (or bar) striking the rock particle or the particle having been accelerated striking a static anvil. According to the strength and structure of the particles, the impact causes fracture or (partial) pulverization of the particle. Pulverization tends to cause the rounding of particles with finer sized material being the result of the breakdown. Impact crushers are particularly susceptible to abrasive material and can suffer high wear rates.

The hammer mill has a series of hammers or bars attached to a rapidly rotating horizontal shaft. Particles fed into the crusher are struck by the hammers and, consequently accelerated by the impact, will strike a static anvil. The impacts can cause breakage or pulverization of the particles; particle size control can be adjusted by controlling the size of a discharge aperture.

The VSI crusher has a rapidly rotating vertically mounted rotor into which rock material is fed; the rotation accelerates the particles horizontally through discharge ports in the rotor to impact against an anvil surface. With high speed rotation, the rock discharge from one port will strike rock that has been discharged from a previous port causing a high level of rock on rock impact. A modified version of the VSI can have feed rock cascading through the impact zone and will achieve a similar end result.

There are a number of ways that particle shape can be improved by the operation of the crushing plant.

The purposes of screening are to:

The types of equipment commonly used for screening are as follows.

Grizzlies are normally made from bars or rails set longitudinally without cross-bars. They are used to remove material that is too large for any particular crushing stage or to eliminate contaminating overburden and fines from run-of-quarry stone.

Screens are used to separate particles into sizes between specified limits or for scalping fines to prevent them unnecessarily passing through a crusher.

Rotary screens or trommels are normally on an inclined axis, and consist of one or more rotating cylinders with apertures of various sizes. Material is fed in at the upper end where the smallest apertures are positioned. Trommels are used for 50 mm and larger sizes.

Vibrating or oscillating screens handle small-size material. When arranged in banks, they produce a number of sizes. Over-loading is a common cause of faulty product grading. Washing of the product is sometimes specified to remove deleterious materials, e.g. fines and salts; it is usually done as part of the screening process. There are a number of factors which affect production gradings, such as the correct orientation of screens, material bed depth, screen angle, correct aperture etc as they all have a bearing on the final product.