For a given confining area and for similar effective grain size, there is no marked difference in stiffness between uniform-graded and well-graded materials. It has been shown in a number of studies that the particle size distribution, or grading, of granular materials seems to have some influence on granular modulus, although it is generally considered to be of minor significance. For crushed limestone with angular shape, a uniform-graded material was only slightly stiffer than a well-graded material. For slag, however, the results were the opposite and the denser grading tended to give a higher modulus. When a crushed rock has less fines (finer than 0.425 mm) it is generally defined as ‘boney’ and the load transfer is through point-to-point contact of aggregate fractions, resulting in high modulus and low moisture sensitivity. In contrast, a material with high fines content relies more on the strength of the fine matrix material surrounding the aggregate fractions to achieve modulus. Where aggregate particles are flat or flaky, mechanical interlock is reduced.

The relationship between the resilient modulus of five source products with four different gradings is shown in Figure 3.2 (Andrews, 1996). 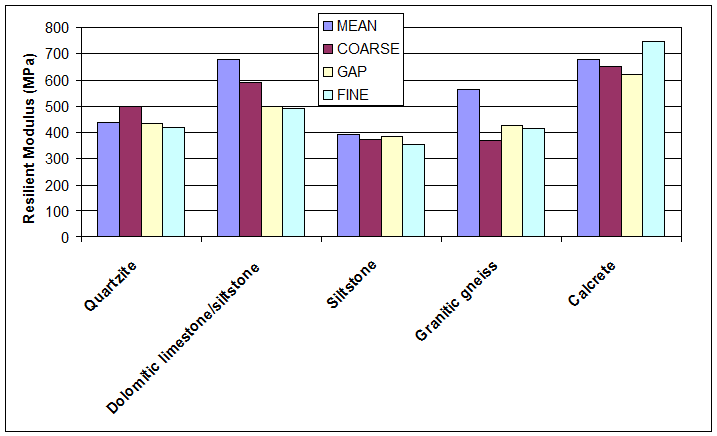