Large parts of the current Australasian road network were constructed in the 1960s and 1970s, a time of strong economic prosperity in Australia and New Zealand. Many rural bridges are even older, dating back to lower design axle loadings. While there has recently been significant investment in high-cost infrastructure, in particular tunnels and freeways in major cities, and many assets are managed through cyclic renewal programs, Australasia’s networks are, on average, ageing.

This is particularly so for structures and concrete pavements. As these assets age, deterioration and the likelihood of asset failure increase. This is evidenced by increased rates of cracking of concrete paving. While there have been no known instances of catastrophic structural bridge failures in Australia and New Zealand due to asset deterioration (except in the case of natural disasters), this has not been the case in the United States, where bridge failure in several States has prompted calls for asset management action. An example is described in Case Study 2.

Case Study 2: Failure of Bridge I-35W on the Mississippi River

This 8-lane steel truss-arch bridge collapsed on 1 August 2007 during the evening rush hour, resulting in the death of 13 people and injuries to 145. Steel gusset plates at eight different joint locations in the main centre span were found to be fractured and under-sized.

Contributing to this design or construction error, 50 mm of concrete had been added to the road surface over the years, increasing the dead load by 20%. Also contributing was the very heavy construction equipment and material resting on the bridge just above its weakest point at the time of the collapse. The load (sand, water, and vehicles) was estimated at 262 tons (266 tonnes). It was determined that corrosion was not a significant factor, but inspectors did not routinely check that safety features were functional.

After this collapse, the FHWA advised the States to inspect 700 bridges of similar construction.

Australia has experienced bridge failures – the collapse during construction of the steel box girder Westgate Bridge in Melbourne in October 1970 was a major disaster with 35 workers killed and 18 injured. It was an example where many things went wrong. Asset management is about the asset life-cycle – from creation to disposal.

In other examples involving steel structures, corrosion of reinforcing in concrete structures can also be problematic, particularly in marine environments. Further information on such aspects is provided in Part 13: Structures.

In both countries, aging short-span timber bridges being subject to loads which they were not designed for has also been an issue of concern.

While such issues should rightly be of concern to asset managers, as they pose risk to life and safety, the pervasive nature of any form of asset deterioration is a critical issue as it represents the consumption of the economic capital invested in the assets. Accounting for assets is not just about calculating a replacement cost and annual depreciation provision, but also about understanding the pattern of economic consumption over time, how it varies, where are the peaks and the troughs, and does reality match assumptions regarding remaining asset life?

Some assets are more important than others because should they fail there would be major or even catastrophic consequences to customers using the service. Asset criticality is described further in Part 6, Section 7.

The possibility of failure events can usually be predicted in advance, but sometimes it takes a failure to bring the issue to the fore; for example, critical equipment used to control traffic as described in Case Study 3 from Washington DC.

“Traffic problems began when an ageing centralized computer that is supposed to control traffic flow failed, leading to uncoordinated lights and traffic snarls …. It was absolute gridlock and chaos …. We live and die by synchronized red lights …. It was pretty scary that the county was relying on one computer to keep its traffic flowing smoothly without a back-up system”.

This example highlights the importance of using a risk management approach to identify what the critical assets really are.

In the same newspaper, there was another article, “Metro pledges to fix the meltdown of 37-year-old tech equipment”. A recent equipment failure “knocked out the transit system’s communications for much of the day”.

Fortunately, a second piece of equipment of the same age, which powered the agency’s most vital operations, did not fail. However, equally, it could have.

The potential failure of assets needs to be considered by asset managers before they happen.

Knowing the answers to the questions a soundly-based asset management approach poses, the agency will have a better understanding of what the critical assets really are and be in a much better position to determine the need for investment. In this case, a back-up computer system may have been an appropriate risk mitigation strategy.

At other times, what seems a reasonable approach to managing an asset failure at the time can have unexpected cascading consequences on other assets, such as in the Auckland power crisis example (Case Study 4). 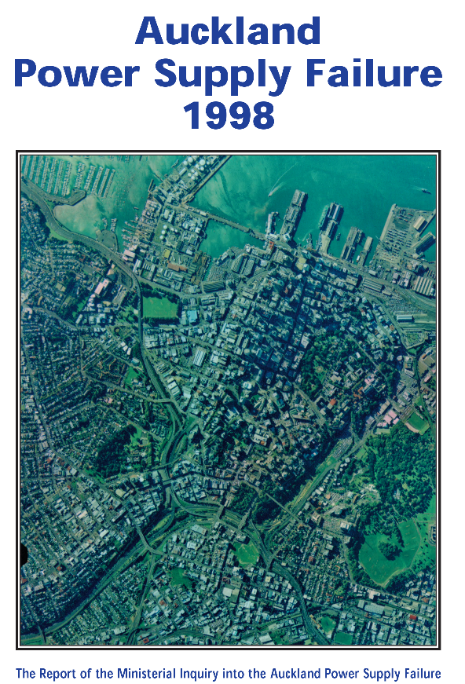 In 1998 the Auckland downtown business district was supplied by Mercury Energy, with electricity supplied via four 110 kV cables. All of this supply came from the national grid at Transpower’s Penrose substation via two gas-insulated cables to a substation at Liverpool Street and another two to Quay Street. The first pair of cables were 40 years old and were past their replacement date. One of these cables failed on 20 January, with the unusually hot and dry weather at the time being a possible contributing factor. Load was shared amongst the remaining three cables, and a crisis averted, or so it was thought.

On 9 February the second cable of the pair failed due to the increased load, which was subsequently shared by the remaining two cables. These newer oil-filled cables could not handle the load either, and failed on 19 and 20 February, resulting in a catastrophic loss of electricity which affected the central city for five weeks. Temporary supply had to be carried by a single 20 kV cable and a hastily erected overhead 100 kV line, resulting in much reduced capacity for over five weeks until full supply could be restored.

In hindsight, such a situation could have been avoided through the adoption of more effective asset criticality and risk management processes. These cables were critical assets – supplying the central business district of New Zealand’s largest city. With the aging of the older cables, the likelihood of failure would have been increasing. This could have been managed through early replacement or load management. The possibility of a cascade failure (the ‘what if’ scenario) had also not been properly assessed.

In the end, a Ministerial enquiry was critical of Mercury’s risk management, contingency planning, operations and asset management practice, in addition to corporate governance. This led to various statutory requirements relating to the disclosure of asset management and security of supply information.

Another outcome was the provision of a higher level of resilience through an additional circuit, away from the current supply routes, a strategy reflected by other electricity utilities in developing ring circuits carrying redundancy.

Globally, the frequency and severity of natural disasters has increased in recent decades. Although loss of life has decreased, since 2000 capital losses have exceeded $2.5 trillion (United Nations Office for Disaster Risk Reduction 2013). Furthermore, by 2050, over 70% of the world’s population will live in cities, compared to about 10% in 1913 (United Nations Department of Economic and Social Affairs 2014). This suggests growing concentrations of exposure to either one-off events or global trends such as climate change.

With the accompanying significant investments in road infrastructure in cities, it is clear that the magnitude of the economic risk to road infrastructure is increasing. Given this increasing risk, asset managers need to think strategically about the resilience of road networks and the organisations and systems that support them (World Road Association 2015, Evans 2017).